I consider myself to live out in the country (even though there is a Target three miles from my house) because there are a lot of pastures, cows, and because my kids’ school is a twenty-minute drive away. Therefore, when you factor in three kids, sports, and a few birthday parties, we wind up in the car A LOT.

Each morning when I drop my two older kids off at school, I have a twenty-minute drive to Jake’s preschool. Being in the car when he was younger didn’t bother me so much. After all, it’s almost a break when you’re toddler’s strapped down in a mini van with his thumb stuck in his mouth, right? But now, as he gets older, I feel like it’s such a waste of time for him to be trapped in the backseat and staring out the window.

So, for the past month I’ve been turning off the radio as soon as Boy #2 gets out of the car and Jake and I sing. Because apraxia is a condition where language improves with repetition of the same sounds, I decided to stick to the same songs each morning.  Christmas is approaching and it is in my wildest dreams to see my baby with his Santa hat slumped over one eye  and singing with the other children during his program.

After quickly critiquing the word difficulty of the most popular children’s carols, I decided to work on “Jingle Bells” and “Away in a Manger.” Also, in 2010 and 2011 Jake was in Kindermusik, so I picked a simple song we learned called, “Bow Wow Wow.” I chose this song because it’s got all the words that Jake is currently working on. Also, just to mix it up, we usually sing “Old McDonald” and “Twinkle, Twinkle Little Star.” He has finally got to the point where he can say most of the animal sounds, so “Old McDonald” is a song I picked primarily for reinforcement of sounds he already knows. 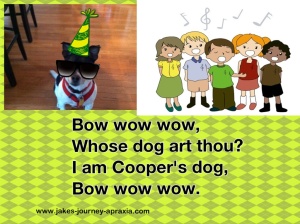 For the first week or so, Jake just sat in the backseat and listened with a grin on his face while I enthusiastically belted out tune after tune. But soon he started humming and after a couple of weeks, he started trying to sing the words with me.

This morning I was preoccupied and did not turn the radio off for our music therapy. I turned the volume down to call my husband, Jake said clearly in his most beautiful voice, “Bow wow, wow.” He smiled and paused.

I was surprised. He never initiates a song, so I just stared in wonder as I waited for the light to turn green. He was looking at me as if to say, “Stop, don’t say anything.  Let me do this.  I can do it.”

He then continued singing in his jumbled apraxic voice, the words barely recognizable, “Whose dog art thou?  I am Cooper’s dog.  Bow wow wow.”

Gooo Jake!  Good job!  I don’t think he’ll be singing perfectly for his Christmas program next week and unless God plops a miracle down in my lap, my wildest dreams probably won’t come true this year, but I do know, without a doubt, that he’ll be giving it everything he’s got. Watch out Jingle Bells, my baby’s on his way!

One thought on “Sing it Loud, Sing it Proud”