At three years old, Gia’s severe speech delay qualified her for services through our school district’s Priority Preschool. I was convinced that with a little extra help, she would catch right up and we would move on with our lives. I really believed that. Eight weeks, one progress report, and no new words later, Gia’s SLP broke the apraxia news.

This is a picture of Gia on her first day of Priority Preschool. This picture represents so many things and so many emotions. It was a simpler time, when apraxia wasn’t a part of our lives, but it was also a time filled with unanswered questions. I remember feeling scared when I took this picture. 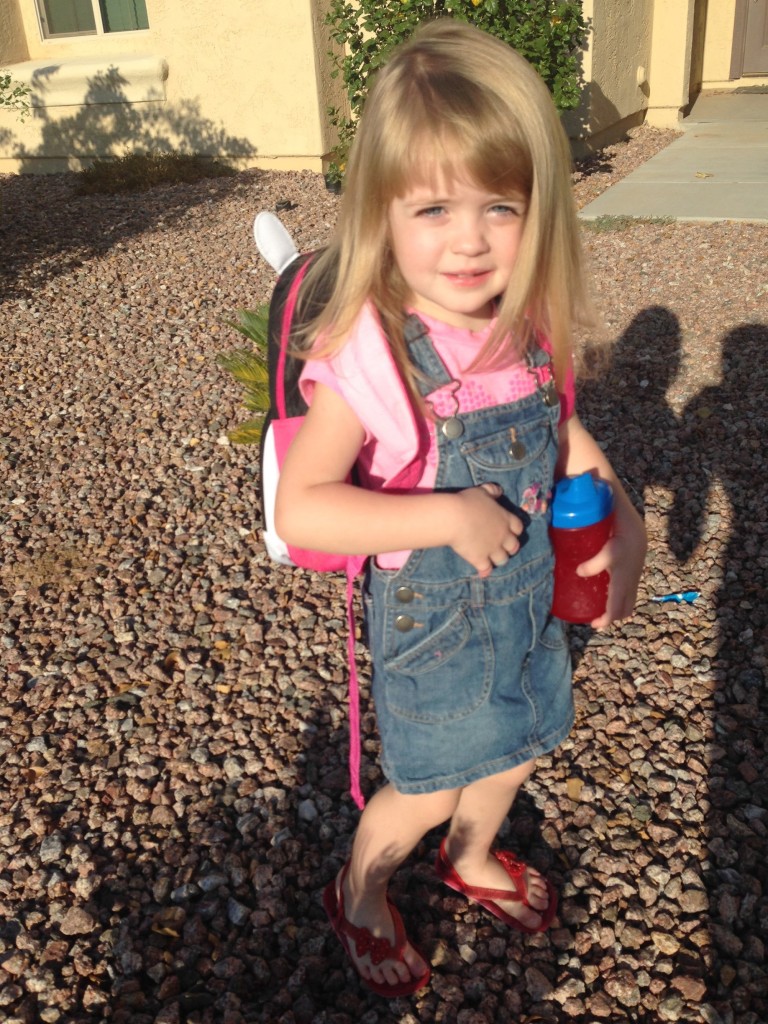 Knowing what I know now, it’s clear to me why Gia’s pre-apraxia therapy didn’t make as much as a dent in her ability to communicate. Apraxia intervention is all about opening doors and making connections. The speech therapy Gia was receiving at preschool was knocking on those doors, saying, “Here’s some more vocabulary!”, only to get stuck inside with the rest of her words, trying to fight their way out.

This is my simplified way of describing the complicated treatment for an even more complicated disorder. When someone asks me what makes therapy for apraxia different, I tell them exactly that. It’s an exaggerated, intensified and overemphasized version of speech therapy.

Gia goes to a clinic in our area called the Foundations Developmental House (FDH). They practice the Speech-EZ method with hand cues, and this is the only method Gia has ever been exposed to. No matter what technique your child’s SLP may use, all approaches to apraxia will have roughly the same concept – drill, drill, repeat.

Once in a while I have an itch to educate myself and sit in on a session. I want to know what this “drill” therapy is all about. What makes apraxia therapy different, and what can I do to follow-up at home?

I want to share with you some of the highlights of a recent speech session I attended:

I took a lot of video during this session. I want to share a few to give you a small glimpse in to an apraxia therapy session and the Speech-EZ method.

In this first clip, Gia and Anna-Alyse are working on her beginning /f/ sound, and they later did the same work with an ending /f/ sound. They are naming the picture cards on the Speech-EZ APSC app and using the hand cues to make both the first and last sound of a one-syllable word. Anna-Alyse makes sure that both sounds are made before moving on.

This next clip shows another simple but effective approach to apraxia. It’s kind of a back-to-basics approach, and probably something many therapists don’t spend enough time on.

Gia and Anna-Alyse are working with a vowel circle. There is an /f/ in the center of the circle, with all of the vowel sound combinations surrounding it. They went around the circle sounding out the CV transition (“foo”, “fee”), and then did the circle a second time sounding out the VC transition (“oof”, “eef”). She has Gia do each combination three times, no matter if she got the sounds right the first time or not (drilling). You’ll notice Anna-Alyse continues to give Gia knowledge of accuracy.

In this last video, Gia and Anna-Alyse are adding plurals to her words. Gia is given a visual to represent both the single and plural nature of something (one bear, four bears). There is an apraxia approach being taken here, but with a little language mixed in as well. It’s the perfect combination.

Anna-Alyse continues to encourage hand cues and accuracy of first and last sounds. She once again, is consistently using knowledge of performance and knowledge of accuracy.

Aside from the obvious, there were three things that I unexpectedly came away with after observing this session: 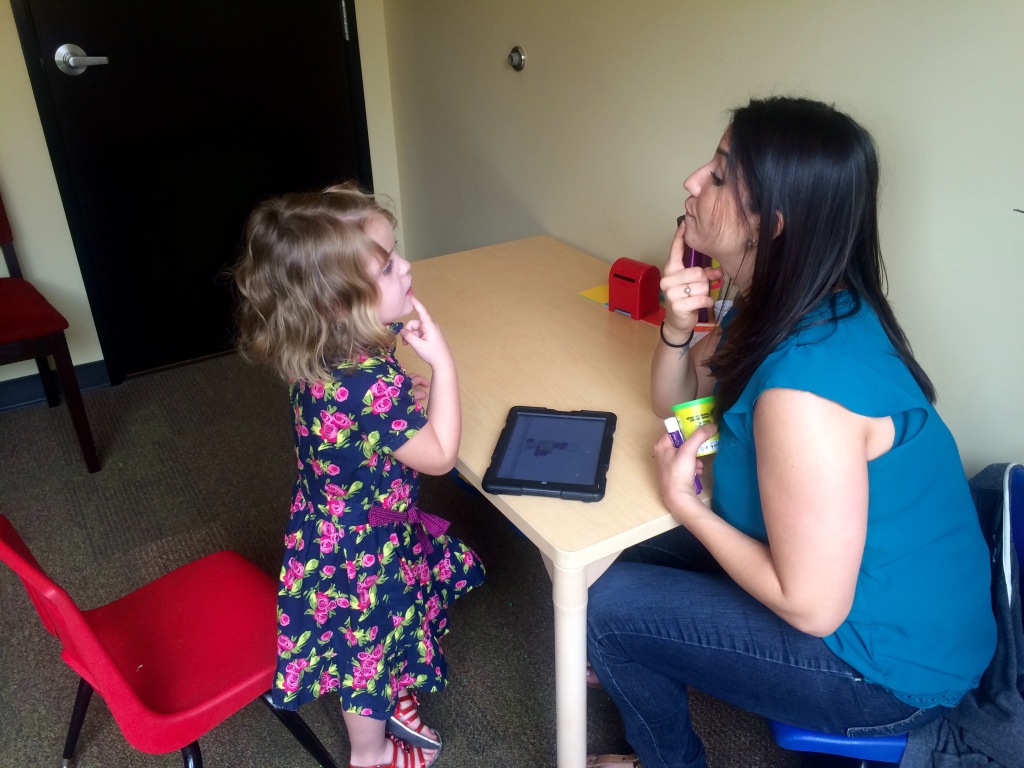 I will never become a regular in Gia’s speech sessions. I want her to continue to build the confidence and independence that I saw emerging, without her mommy there trying to make it all better. But I would encourage everyone to do this from time to time. It keeps you involved and informed, and shows your child you are supporting them from the sidelines.

THANK YOU Sheila, Anna-Alyse, FDH, and Gia for sharing such VALUABLE information today!

To follow Sheila and Gia on their journey with apraxia, visit http://whatwouldgiasay.com.

More about Sheila … Hello! My name is Sheila, and I am a stay-at-home mom, living in the Arizona desert with my husband and two kids. My first born, Nicholas, is five years old and started Kindergarten this year. Just 12 months after my son was born, my daughter, Gia came in to our lives. She is now four years old and in her second year of Priority Preschool. Gia was diagnosed with apraxia of speech almost a year ago, as well as suspected sensory processing disorder. She also suffers from eczema and food allergies to all types of nuts and eggs. I continue to navigate through some other food intolerances. Gia is currently in speech therapy 3x/week, occupational therapy 2x/week, and music therapy 1x/week. I left my job and dedicated my life to my family and my daughter’s apraxia. Finding balance is always a challenge, but I try my best by taking a little time to do the things I love: running, crafting, and writing. I can be reached at sheilatufano@gmail.com.