This is Part 2 of my series on genetics and apraxia. Please click here to read Part 1. 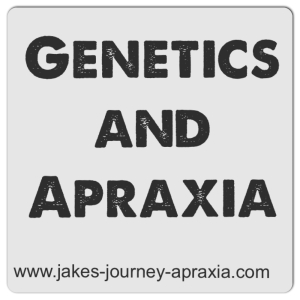 The genetic results of Jake and the two other children studied, can be found by clicking on this PDF link …

I remember the first time my interest really sparked about genetics and how it could benefit Jake.

In July of 2013  I blogged that Jake had reacted negatively when I gave him an epsom salt bath, which is supposed to be a good detox remedy. He was super hyper, couldn’t sleep, and got a stuffy nose. I asked if any of my readers had ever heard of this happening to other children.

A mom commented, “Jake may have a CBS mutation, which makes epsom salt baths not a good idea because of the sulfur.” She proceeded to tell me about the 23andMe test, Genetic Genie, and Amy Yasko’s book.

That same mom is sharing her son’s results on my chart above. Thank you Candace, for planting the seed.

Until that moment, I had never heard of those things, but I knew at that moment that I wanted to get Jake tested ASAP.

Although there are approximately 25,000 genes in the human body, I have chosen to focus on a handful that are discussed in greater detail in Dr. Amy Yasko’s book “Autism: Pathways to Recovery.”

According to our Genetic Genie report, “Dr. Yasko considers addressing CBS mutations as first priority aside from addressing the gut.”

Based on our genetic results, I believe that Jake is affected by his CBS mutations, but only slightly. He is sensitive to sulfur, but can tolerate small amounts. Sulfur is not something I want to take out of his diet because it is so important to the body. It is something to be mindful of, however, especially in relation to sulfur-based medication.

Please know that there is a lot more to a CBS mutation than sulfur intolerance, but because of the detailed nature of this topic, I am keeping it short and sweet.

Please see the chart for the results of the other two boys.

CBS mutations play a role in the body’s ability to methylate properly.

Based on the NutrEval test Jake had done through our integrative MD’s office in August of 2012, Jake definitely had a methylation issue. 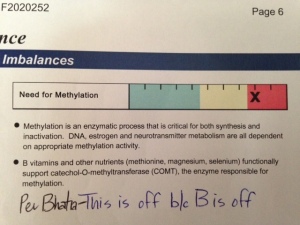 Methylation is like a revolving door (the kind in an office building or hotel). On a daily basis, toxins are coming in and in a healthy person, toxins are also going out. When there are problems with methylation, toxins get trapped and build up, which can result in short and long-term problems. (2)

Although some of us can eat a diet of processed and pesticide-riden food, get all the recommended vaccines, drink tap water loaded with chemicals, etc. it makes sense to me that some of us may not be so hardy due to genetic predisposition.

Dr. James and Dr. Deth had discovered that many autistic children suffered from a failure to naturally detoxify their own bodies. (3)

The miracle of methylation, once restored, rescues innumerable children from severe problems. (3)

How does methylation relate to apraxia?

Methylation can cause many issues including “language and cognition impairment.” (4)

I also found it very interesting since our apraxic children are sometimes prone to graduate to other disorders – specifically ADHD – that “Methylation also helps to maintain proper levels of neurotransmitters – particularly dopamine, the neurotransmitter most often involved in ADHD.” (3)

BH4 is needed for the development of language. More information on BH4 and how CBS and MTHFR mutations tie in, can be found in the following article: “Grain-Free Eaters Beware: Too Much Meat on Healing Diets?”

What were our MTHFR gene mutation results?

“MTHFR: Since an estimated 60% of the population has this condition, and it is the underlying cause for many chronic illnesses, shouldn’t we all be getting tested?”

This was another genetic marker that I found intriguing. Jake has 2 of 2 homozygous (+/+) PEMT gene mutations. According to Yasko …

PEMT is a gene that bridges the connection between the methylation cycle and estrogen. Research has shown that the PEMT gene is increased by estrogen. … This is an important area of inquiry since there is a predominance of autism in males as compared to females. That supports other indicators that hormones contribute to autism. (2)

The other two children in this study were (+/-).

The GAD enzymes convert glutamate into GABA. People with GAD mutations may need help making GABA. It is very important to have GABA and glutamate in the body balanced. GABA calms the body and glutamate excites it. GABA is also a key to speech and this supplement is often used to help restore speech in stroke sufferers. GABA also supports sensory integration. (5)

Of particular interest to me, was that Jake was homozygous (+/+) to 4 of the 12 GAD1 genes. The other two children had mixed results. See chart for details.

The last mutation is the gene that was addressed in the report “Syndrome of Allergy, Apraxia, and Malabsorption: Characterization of a Neurodevelopmental Phenotype That Responds to Omega 3 and Vitamin E Supplementation” by Claudia R. Morris, MD and Marilyn C. Agin, MD.

This report states, “Genetic testing was performed on 10 boys. 100% of whom carried a gluten-sensitivity HLA “DQ” allele (6 with DQ1 gene, known to be associated with neurological complications of gluten sensitivity and 4 with DQ2 associated with classic celiac disease.”

My sample showed the following results for the genes located under “gluten sensitivity” on our report:

The other two boys both have some mutations on NDUFS7, categorized under mitochondrial function. I had not done any research in this area because Jake had a minimal amount of mutations present. Both of these children have an autism diagnosis in addition to apraxia. It should also be noted that one of the moms does not feel her son is currently exhibiting signs of apraxia anymore.

If you decide to get your child tested with 23andMe, I would love to include your results to this side-by-side comparison. I will keep a tab labeled “Genetics” at the top if you’d like to refer back in the future.

Also, comments are always welcome. I’d love to hear your thoughts on this topic.

* Candace, the mom mentioned above, blogs at Reaching Buzzy.

Disclaimer: All data and information provided on this site is for informational and entertainment purposes only. I am a mom, not a MD or a geneticist. All of the above information is to the best of my knowledge accurate. Please see complete disclosure at the top of this page.

3 thoughts on “Genetics and Apraxia – Part 2”