Everyone has a story … and Kathy and Kate Hennessy, a mother-daughter author team, narrated theirs perfectly in the book Anything But Silent.

Kathy Hennessy is the Director of Education at CASANA (Childhood Apraxia of Speech Association of North America) and was also one of its founding members. Kathy has an intimate connection to this nonprofit group because her two children, Kate and Andrew, were both diagnosed with childhood apraxia of speech when they were kids.

Anything But Silent is told from two perspectives and chapters alternate between a mother and daughter’s voice. It is the story of a mother’s struggle to help her children find their voices. Simultaneously, it is the story of her daughter and how apraxia looked through her eyes, not only when she was growing up, but also now. 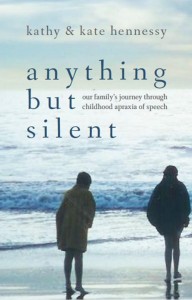 This book is about moving mountains. It is about courage, strength, and determination. It is about pushing forward when life is really terrible. It is about winning. It is about struggle. It’s about having all the odds stacked against you and coming out on top.

It is about beating apraxia, but also intensely appreciating the everyday moments that occur on the road to recovery. It is about becoming a better person because of the challenges that have been placed upon you. It is rejoicing in the small victories that most people wouldn’t think twice about.

This was the most unreachable, deepest torment I had ever experienced. The pain was so real that I could almost touch it. Something changed that day. The child that I carried with me for nine months, the child that I told all of my hopes and dreams for her before she was even born, was gone. My unnamed dream child was gone and in her place stood reality. The reality was the bright, beautiful and engaging Katie. And Katie had a problem. I decided that day that there were two choices; I could beat my breast about the unfairness of life or I could educate myself and help my daughter move her own mountains. I chose the second.

And sentences like this from Kate are emotionally rich and make me hope that one day when my own son is older, he will feel the same way about his own journey with apraxia …

The truth is, I’ve come a long way since my days in speech therapy, but in all honesty, I wouldn’t change a thing. Apraxia is, and will forever be, part of who I am. Apraxia doesn’t define me, but it is part of me. Those early years can be so difficult and heartbreaking, but if you can make it through the storm, everything that follows is so much sweeter.

Anything But Silent captures the past, present, and future of what life looks like when you have a child (or children) with apraxia. It is a quick read, at 150 pages, and is filled with everyday stories like Santa visits, bullies, battling with insurance companies, etc. It also tells the inspirational story of how these two special ladies became so involved with CASANA.

What I really, truly loved about this book was that I could relate to every sentence that Kathy wrote. Many times through this book, my eyes would swell with tears because I felt like she articulated my own thoughts and feelings so well. And Kate’s point of view just made the story that much more insightful.

This book reassured me that I am not alone in my thoughts and experiences. I send big hugs to this sweet family!

In my opinion, this book is a must-read for SLPs and parents who have kid(s) with apraxia or another developmental disability. I also think this book would be great way to get fired up for the CASANA conference in July!

Kathy Hennessy has graciously offered to give away one free copy of Anything But Silent in honor of Better Speech and Hearing Month and Apraxia Awareness Day, which is on May 14. To register, all of you have to do is leave a comment below (what you say is up to you) or shoot me an email at tstarmom5@yahoo.com Registration will close at the end of the day on Sunday, May 18th and I will announce the winner a week from today. Best of luck to you!

Disclaimer: Kathy Hennessy provided me with two free copies of “Anything But Silent.” One to read for myself and the other to offer as a giveaway on my blog. I was under no obligation to write a positive review or sponsor this giveaway.

30 thoughts on “Anything But Silent – Book Review”