Video games nowadays astound me. I was a child of the eighties and spent many hours in my room playing Pong and Pac-Man on a tiny black and white television set. Yes, it was serious entertainment to volley a computerized ball back and forth and it was even better to eat ghosts and clear a maze of dots in record time.

In 2006, one video system came out that far surpassed all of its counterparts … Wii. All of us heard the sales pitch: No longer will your kids sit around, zoned out, and get overweight playing video games. Instead, they will be moving around, interacting with the game, and burning calories without even knowing it!

Over this hot southern summer that we had, Jake’s brother taught him how to play Wii Sports. His favorites are boxing, tennis, and baseball and I love seeing him finish up an hour of sports play with sweaty hair, flush cheeks, and even a little out of breath.

Jake is getting the most out of his Wii experience. He is engaged. He is interacting with it. If he’s not smacking home runs, he adjusts his body or his swing. He gives it his all and if that doesn’t work, he gets mad and tries harder.

A couple of weeks ago, however, I walked in the room to find Lil’ Man slouched back in the recliner, body sedentary, with the Wii controller moving back and forth in his hand. He had figured out he didn’t have to do all that moving to achieve the same result. He was taking the easy way out. He was going through the motions, but not really playing the game.

How many of us find ourselves in a rut like that from time to time in dealing with apraxia? I know I do. How easy is it to just go through the motions without really interacting with the game? Apraxia is a full-bodied speech disorder that requires complete and total interaction. You’ve got to sweat, work hard, and you have to adjust your teaching style if something isn’t working. 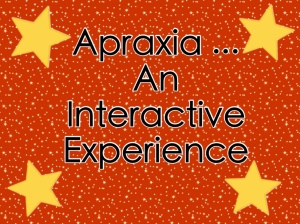 I’ve found this to be especially true over the past week. We are ten days into Jake’s new diet and he has been taking supplements for six days now. I have been so exhausted from this process that I’ve been guilty of going through the motions; accepting Jake’s far from perfect speech without having the energy to correct his mistakes or practice his words.

Jake’s also worse than ever at speech therapy; I feel like our SLP is in a rut just like we are.

On Tuesday Ms. Kelly and I talked about ways we can engage him … ways we can adjust our swing. I think moving around right now will be key in getting him over this hump. Our new plan is as follows;

At home this week I’ve taken the same approach primarily because it’s difficult for him to say his words when he is standing on his head on the couch or rolling around on the floor acting silly. Wednesday night we marched around the house and played ball while also saying his Kaufman words.

I suppose it’s inevitable that we are all going to fall into an occasional slump because life happens and there are no perfect parents or speech therapists out there. But, we must be quick to pull ourselves out. We must give apraxia our all because it is a fierce competitor.

Occasionally you can kick back in the recliner, like Jake was doing that day, but most of the time to get the best results, you have to be interactive. Maybe getting interactive means a new diet plan for your child, a new type of therapy, or seeking out a new SLP if yours isn’t working out.

When I feel discouraged, I think of the words of Michael Jordan: I’ve missed more than 9,000 shots in my career. I’ve lost almost 300 games. 26 times, I’ve been trusted to take the game winning shot and missed. I’ve failed over and over again in my life. And that is why I succeed.

One thought on “Apraxia – An Interactive Experience”