Earlier this week, Venus and Jupiter were visible in the night sky, but unfortunately I missed it. As much as looking up at the sky on a crisp, cool almost spring night makes me exhale in peacefulness, sometimes the to-dos in life take precedence over the want-tos. Space, however, has definitely been in our family’s atmosphere this week.

On Sunday night after the kids went to bed I watched the movie A Smile as Big as the Moon. It was on television last month and I chose to DVR it only because it had John Corbett in it. (a.k.a. – Aidan, the sweet and sexy furniture maker that stole Carrie Bradshaw’s heart in the good old Sex in the City days.) Also, it had children in it and I’ve always been a sucker for a wholesome movie. 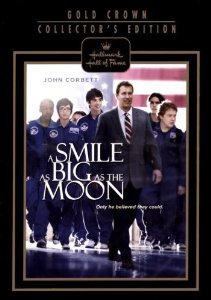 If you haven’t heard of this movie, which came out in 2012, or if you haven’t seen it, find it and watch it! I promise your spirit will be lifted. It is about a Michigan special education teacher who fights for his class to go to NASA’s Space Camp in Alabama in the 1980s. It is based on a true story and even though the odds are stacked against these kids, they prove everyone wrong and persevere. What’s not to love about a story like that?

On Tuesday night, we went to LD’s second grade musical at school called Spaced Out and well, it looks like we’ve got a little Justin Timberlake on our hands. LD is a unique, talented, and hardworking child. Although he has his moments as all children do, we ultimately know that he will always be able to handle anything that life throws at him. Those qualities make me feel very lucky to be his mother and proud of his accomplishments. We loved soaking in every moment of his musical, which was about the stars, moon, sun, and planets.

As the children recited their lines, I couldn’t help but let my mind shift to Jake who was sitting silently, mesmerized by his brother’s classmates. I watched each child’s mouth move in perfect precision, some speaking clear and confident into the microphone, while others said their lines as quick as possible, their eyes planted on the floor. But all of them saying their lines. Would Jake at eight or nine years old be able to do this? Something that used to seem so easy that I took for granted with my other children, now seems like such a challenge.

Lately, I’ve been preoccupied lately with chores and my time spent teaching Jake has been limited. Watching these children was a reminder to me that I need to give Jake as many opportunities as possible to learn right now.

I am proud to report that this week I forced myself to ignore the silent piles of stuff and gave Jake more attention. Last night for the first time in two weeks, he did abcmouse.com for about thirty minutes and I tried to think outside the box and made it a point to show him the “in” and “out” signs at stores this week. We also raided his brother’s bookshelf and read some new books. Including The Gingerbread Man, which is quickly becoming his favorite book.