When I first started this blog, back in December, I told myself I would not attempt to explain technical speech terms because I do not have a master’s degree in speech-language pathology. I do, however, have a journalism degree, which means I’m a lover of: learning new things, embracing fresh ideas, and then writing about it.

I present this disclaimer because there are terms I have heard from SLPs that have kind of made sense at the time, but concepts I didn’t fully grasp. The reason I’m taking the time now to fully understand them is because some of this terminology relates to the /p/ sound, which is proving to be the most difficult for Jake to learn. My curious nature and journalistic brain wants to know why and therefore, understand what we are up against. 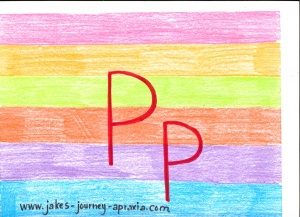 From the beginning, I have been told that /p/ and /b/ are minimal pairs, which I have equated to being the same, but different: /p/ is voiceless and /b/ is voiced. According to the Guidelines for Normal Speech & Language Development chart I got from our ENT, children six months old use both of these sounds in babbling and at eighteen months old, they inconsistently use them at the beginning of words. Based on this evidence, I would think /p/ would be an easy sound for Jake to transition to since /b/ came so easy for him.

Fortunately, I ran across a website today (www.soundsofenglish.org) that explained the difference between these two sounds in a way I could understand. /P/ is considered voiceless because you do not use your voice to say it. If you put your hand on your throat and make this sound, there is no vibration.

/B/ on the other hand, is considered voiced because if you do the same exercise, you feel a vibration. Another difference is if you put your hand in front of your mouth and say the /p/ sound, you will feel a puff of air, whereas, there will be almost no air with the /b/ sound.

These two sounds are similar because the mouth makes the same movement to produce them. No wonder it’s not that easy for him to say /p/. Turning your voice box on and off in a moment’s notice can’t be that easy to do! The more I learn about the complexity of speech production, the more I am truly stunned at the miracle of language.

Now that I have some answers to my questions, I still don’t have an answer to the most important question of all: How do I get Jake to say this sound on a consistent basis? For the past year, we’ve tried different things to pry this sound out of Lil’ Man’s mouth. A handful of SLPs made the following suggestions and we’ve tried them all:

These were the kind of things we did in the beginning, before Jake was diagnosed with apraxia. And while these exercises were fun for him, they didn’t strengthen his /p/ sound. For the past couple of months, we have changed things up, however, and I am now seeing gradual progress. The following things have made a difference:

Also, for the past two weeks, Jake has been doing some speech apps on the iPad and so far, so good. I like “Tiga Talk” because he has to make the /p/ sound repeatedly, which I think is helpful. Also, last night I finally took the plunge and bought the Speech-EZ Apraxia app. I’m hoping this will make a difference as well.

2 thoughts on “Apraxia Therapy and the /p/ Sound”